A new generation of models, methods and technologies for addressing the current threats to water security

The relevance of the project is connected to its orientation towards improving – on the basis of today’s mathematical models – the existing methods of water management calculations and hydrological forecasts, risk assessment of dangerous hydrological phenomena, water quality evaluation and prediction, methods of water use planning, managing the existing water resources systems. The methodological foundations for solving these and other tasks were developed several decades ago and were mainly based on processing the existing observation data. Possibilities of upgrading the task solution methodology are especially relevant in relation to the increased requirements to providing water security in the changing environment of water regime formation. The existing engineering approaches are based on the hypothesis of climate stationarity and anthropogenic influence on the river basin and may have a considerable margin of error under the conditions that are different from the ones earlier observed. Realisation of the mentioned possibilities by creating and employing the new generation of methods and technologies for solving the most relevant water security problems in Russia’s major river basins will be the main result of the project. The scientific novelty of the given tasks is related to the project’s orientation towards constructing a uniform methodological framework for solving current water security problems, which would rely on the system of mathematical models of river runoff formation and surface water quality, together with the models of water resources system functioning, modern automated data analysis systems and their software implementation.

The four groups of tasks are to be solved (the more detailed description of them can be found in Form 4 of the application):

1.    Scientific research tasks, including: (1) development of a system of hydrological and hydrodynamic models, water resources and water quality management models in order to solve the diagnostic and prognostic tasks of river basin hydrology, (2) modernisation of the methodological framework of the existing non-structural measures to combat the threat to water security, based on the elaborated models.

2.    Technological tasks, including the creation of active information-modelling systems and technologies, which would rely on the elaborated methodological basis of non-structural measures to combat the threat to water security.

3.    Applied tasks, which consist in the implementation of the developed methods and technologies of a new generation, creation of software complexes for solving water security problems in Russia’s major river basins, patent research and introduction of the developed technologies into the operational practice of relevant ministries, agencies, joint stock companies, etc, as well as the organisation which co-finances the project.

The grant was received in August 2017, within the Presidential competition for the support of the world-class laboratories. The project is implemented by the personnel of the River Basin Hydrology department of WPI RAS, Lomonosov Moscow State University and Timiryazev Academy. In 2019, we received a number of important scientific results, including the following.

Progress in the development of a methodological framework

·      Adaptation of scenario calculations to the current hydrometeorological context was methodologically improved in terms of their correction considering data on the actual snow water equivalent, runoff over the previous regulation period and the official forecast from Russia’s Hydrometeorological Centre. This allowed us to produce estimates (predictions) of inflow, which demonstrated a good convergence with the observed values, and to use them during the operational management of the Volga-Kama cascade.

·      We continued working on the creation of the methodology and software aimed at solving the inverse hydrological problem, based on the theory of fuzzy sets. Improvement methodology for the cases of one, two and several parameters, including those heterogeneous by nature, was developed in detail.

·      We developed methodological recommendations on engineering hydrological findings with insufficient hydrological-hydrochemical observation data, taking into account specificities of planning, including the conceptual basis, organisation and technical assistance, as well as the detailed description of the methodology of the EMMA analysis of river runoff feeding sources and of water quality modelling based on the models of mixing 3 and 4 sources. We also provided an overview on the results of the in situ observations at smaller experimental basins in different geographical conditions (the Ussuri, Gilyuy, Baikal, Daugava basins).

Progress in the development of hydrological calculations and forecast technologies

·      The source code for the STREAM_2D model was improved, based on the new algorithm of solving the Riemann problem for the equations of shallow water on a rough surface. In accordance with the test runs on the automated observation network data from smaller rivers of the Far Eastern and North Caucasian regions, a comparison with the in situ data and the KW-GIUH program (Taiwan) results was carried out. The STREAM_2D model revealed a number of advantages.

·      Projects of the ECOMAG and SWAT hydrological models were created for the Ussuri basin, calibration and calculations were realised on the data of the Primhydromet observation network, as well as on the output of the GFS and WRF models.

·      Source code for the KW-GIUH model was updated. The model was integrated with the GFS, SWAT and STREAM2D, in order to create a system of forecast and warning of fast-growing floods, with test runs on the automated observation network data from smaller rivers of the Far Eastern and North Caucasian regions.

·      We conducted numerical modelling of the hydrodynamic regime in flood areas, assessed social economic and ecological risks and effectiveness of protection measures under possible natural and man-induced scenarios of floods on residential territories near the basins of several major rivers. The study included: the Northern Dvina R. near Veliky Ustyug; the Lena R. near Yakutsk; the Amur R. in the confluence section between the Zeya and the Amur near Blagoveshchensk; the Volga R. near Nizhny Novgorod; the Lower Don section from the Kochetovsky hydrological unit to the Taganrog bay. For the first time, a two-dimensional numerical hydrodynamic model of the Amur channel and valley was elaborated, from the confluence with the Zeya R. to the Amur estuary.

·      Short-term prediction of the Ussuri runoff was carried out in test mode, based on the river runoff formation model in the Ussuri basin, using short-term meteorological forecasts on a mesoscale meteorological model. Results of the “error corrector” development based on the machine learning and artificial intelligence methods were obtained.

·      Short-term predictions of fast-growing floods on smaller rivers in the North Caucasian region and in the south of the Far East were carried out in test mode, using the current data of the automated hydrometeorological network – the results of modelling outstanding floods using the KW-GIUH and STREAM2D models, on the meteorological radar data and operational models of the atmosphere.

Adaptation of the scenario water management calculations to the current hydrometeorological context in terms of their correction considering data on the actual snow water equivalent, runoff over the previous regulation period and the official forecast from Russia’s Hydrometeorological Centre. This helped to produce estimates (predictions) of inflow, which demonstrated a good convergence with the observed values, and to use them during the operational management of the Volga-Kama cascade. 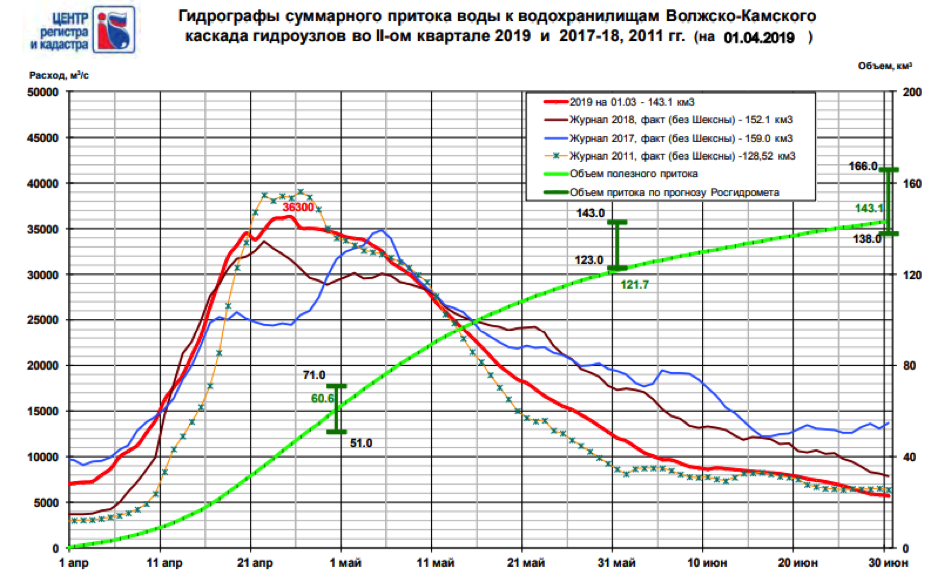 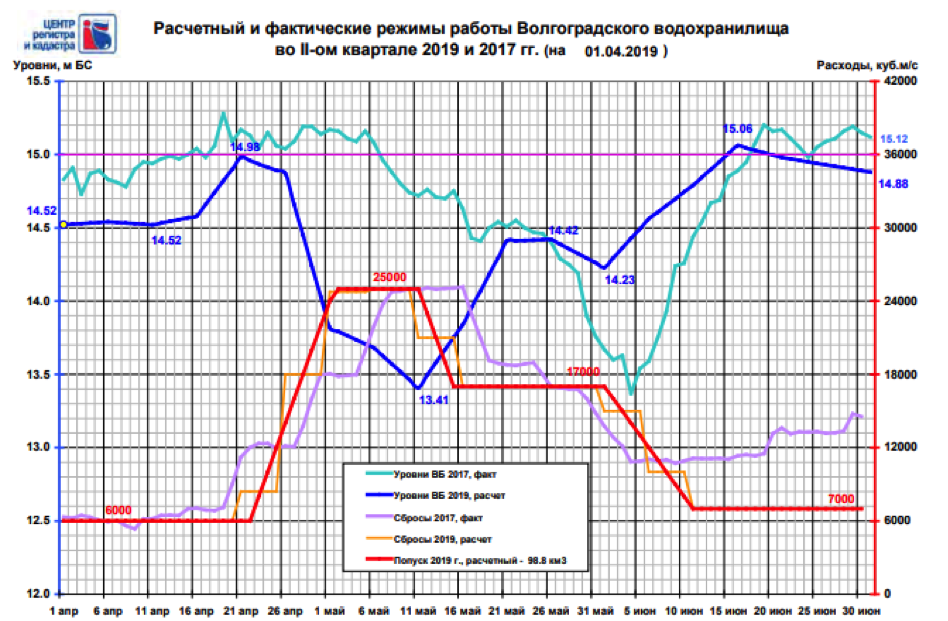 Testing short-term predictions of fast-growing floods on smaller rivers in the south of the Far East, using the current data of the automated hydrometeorological network, the results of modelling outstanding floods using the KW-GIUH and STREAM2D models, based on the meteorological radar data and operational models of the atmosphere.

B). Hourly precipitation fields (over 5 mm/h) calculated on the weather radar data

Hourly precipitation, actual and estimated runoff hydrographs obtained on the KW-GIUH and STREAM-2D models using the weather radar data. The Amba R.-Zanadvorovka, the historic flood of 2017

Results of numerical modelling of the hydrodynamic regime in flood areas, assessment of social economic and ecological risks and effectiveness of protection measures under possible natural and man-induced scenarios of floods on residential territories near the basins of several major rivers 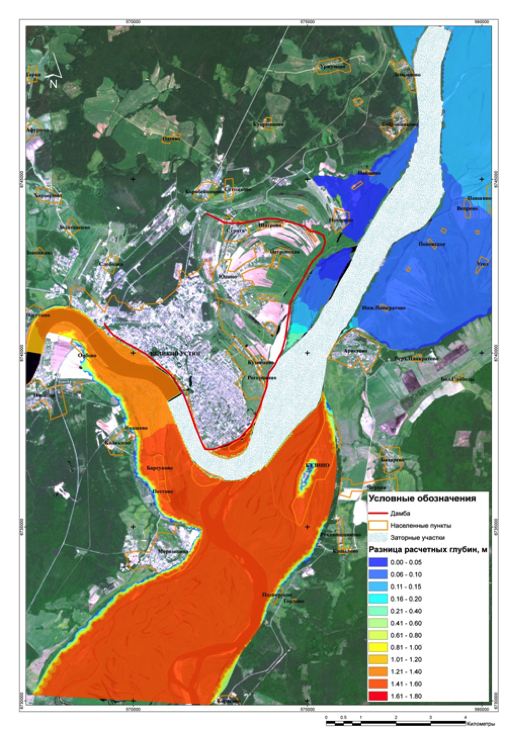 Differences in flooding depths, calculated on the STREAM_2D model, near Veliky Ustyug with the 1% levels of the ice jam genesis in today’s conditions, with a protective dam 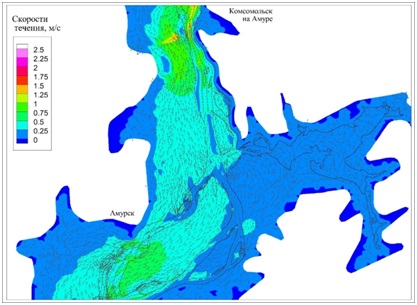 A fragment of the flow speed field, calculated on the STREAM_2D model, near Komsomolsk on the Amur at the peak of the 2013 flood

Within the framework of the project, the School of young researchers was held under the title “River runoff modelling and forecasting, managing hydrological risks: towards a new generation of methods”, from 9 to 14 September 2019, in Nizhny Novgorod, 46 Ulyanova St, Applied Physics Institute of RAS (http://school2018.iwp-hydro.ru/).