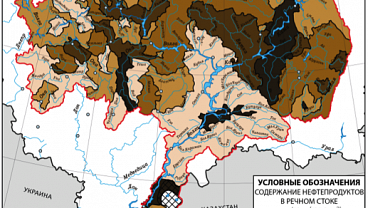 Analysis of spatial-temporal changes in the quality of water resources of European Russia, dynamics of their composition and pollution over the last 50 years influenced by non-stationary climate and economic activity on water catchments

The project is aimed at solving the fundamental problem of further development of scientific methodological bases of groundwater and surface water quality formation in the current situation of non-stationary climate and the growing anthropogenic impact on the environmental components. This scientific problem is connected with the priority of “Environmental management” and will contribute to the development of technologies for environmental protection.

Given the strong anthropogenic influence on natural waters formation, water quality assessment is becoming relevant, especially that of the chemical composition, taking into account the adverse consequences being observed. That is why identifying spatial-temporal changes in the quality of water resources in European Russia, chemical composition dynamics and the extent of water contamination over the last 50 years are particularly relevant in the context of non-stationary climate and intense economic activity on water catchments.

It is known that climate is the crucial factor shaping water resources formation and composition. In connection with this, the updated values of overall river runoff and its genetic components received earlier by the authors of the project will allow one to solve the problem of the quantification of hydrochemical runoff and its separate indicators on a new modern basis.

The relevance of the planned research is particularly important for the water objects and catchments located in European Russia, where the current anthropogenic impact on the environment is not only negative, but devastating for the hydrobionts (Karelia’s small lakes), also leading to a significant change in the water and hydrochemical regime of water objects, which, combined with water sources contamination, directly affects human health.

The findings will allow one to classify water objects in the European part of Russia according to the degree of their contamination, using the values of the specific combinatorial index of water pollution (in accordance with the integrated methodology of HCI) and identifying the key pollutants and the dynamics of their concentration in time. This classification will form the basis for the identification and specification of the regularities in the formation and indicator distribution of hydrochemical runoff at large and of its separate components, considering the direct impact of the economic activity on the watersheds. Along with this, river water self-purification capacity (ecological runoff) will be estimated, and it will be possible to establish major factors shaping water and hydrochemical runoff formation in the context of today’s climate conditions and the scale of economic activity on the watersheds.

Over the whole research period, we managed to analyze major water catchments of the rivers located in European Russia – the Northern Dvina, Oka, Don, Volga and Kama, as well as separate rivers of the North (North-West, Kola Peninsula and the Pechora R. basin) and of the South (small and medium rivers of the Azov-Black Sea basin, rivers of the Kuban and Terek R. basins).

The collected database helped to calculate the average values, average values over the period and annual values of the runoff, as well as the values of more informative water chemical composition ingredients. In order to analyze runoff characteristics and water composition, their changes over time intervals were considered within both all river basins and their parts. To that end, a principle of selecting the so-called “private watersheds” was proposed, when calculation values are estimated within a part of a basin between two gauging stations. For the gauging stations, we calculated the values of hydrological-hydrochemical indicators, as well as those of renewable resources of surface and ground waters, the latter of which were estimated mostly on the average low flow. Examination of the whole basin and its parts allows one to evaluate the contribution of every single watershed into the general dynamics of runoff and hydrochemical values, and identify their changes, influenced by the non-stationary climate of the last decades and intense economic activity.

Analysis of the data provided by water balance stations helped to calculate surface slope runoff in the period of from different landscape and its changes under the impact of agro-technical measures and climate in the southern part of the Russian Plain. It is demonstrated that the current surface slope runoff in forest-steppe and steppe areas is several times smaller than it was 50-70 years ago.

Evaluation of the long-term dynamics of water quality and contamination was carried out based on the combination of the differential and comprehensive evaluation methods. The differential method water quality assessment based on separate pollutants, using their and applying statistical techniques. The comprehensive evaluation illustrates the hydrochemical condition of the aquatic environment based on a number of water quality indicators. It also allows one to classify the degree of water contamination considering the anthropogenic pressure. The river water chemical composition in the representative basins was analyzed according to 15 hydrochemical indicators.

Were prepared in order to monitor variation in the values of the specific combinatorial index of water pollution and river water quality class within the selected representative basins of European Russia over a long-term period. The analysis resulted in a list of key pollutants – critical indicators of river water contamination.

To visualize the ingredient characteristics received, we applied the adapted methodology of cartographic models of spatial distribution in the basin of a specific river. The areal distribution requires the indicators of water quality and chemical composition – the hydrochemical runoff module and the river pollution integral indicators, which allow one to provide spatial and temporal characteristics for the quality of the aquatic environment and identify its dynamics over the last years affected by climatic and anthropogenic factors.

Maps of the average module indicator for the runoff of petroleum products and phosphorus phosphate from a site on the Volga R. basin (tonnes/year from km2) for 1990-2015 are provided as an example.