Eddies under the ice

The phenomenon of ice rings on Lake Baikal became the initial impulse for this project. For the first time, giant rings in the ice cover were discovered by scientists of the Limnological Institute of the Siberian branch of the Russian Academy of Sciences (LIN SB RAS) with the help of satellite images in spring 2003 in Middle Baikal near cape Krestovsky. During further research, it was found that similar ice structures with a diameter of 4 - 5 km or even more, sometimes reaching 10 km, often appear on the ice of Lake Baikal in spring before the destruction of the ice cover.  In 2009 the ice ring was discovered at the southern end of Baikal, near the town of Slyudyanka (fig. 1) [Granin N.G. The Ringed Baikal // Science First Hand, 2009, № 3(27), p. 22 – 23;Kozlov V.V., Mizandrontsev I.B., Aslamov I.A., Kucher K.M., Makarov M.M., Gornov A.Y., Granin N.G. Modeling of dynamics of Lake Baikal ice thickness //Vestnik AGTA 2010, № 4, p. 74 – 82]. Later space images from the previous years were carefully examined, and it was revealed that the rings had been there before, beginning with the 1970s. Similar rings were later captured by images in different years, starting from 1975, on Lake Hovsgol in Mongolia. Systematization of the space image data (fig. 2) can be found in [Kouraev A.V., Zakharova E.A., Rémy F., Kostianoy A.G., Shimaraev M.N., Hall N.M.J., SuknevA.Ya. Giant ice rings on Lakes Baikal and Hovsgol: inventory, associated water structure and potential formation mechanism // Limnology and Oceanography. –2016. – 61. – p. 1001-1014.]. The rings have an almost round shape in diameter, on average 5-7 km, with the width of a ring of darker and thinner ice being about 1 km (fig. 2,3). 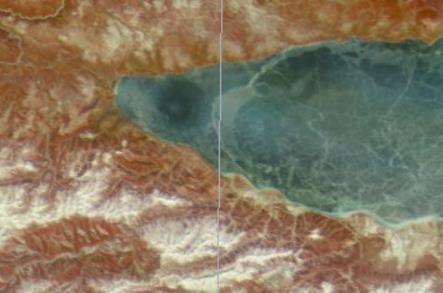 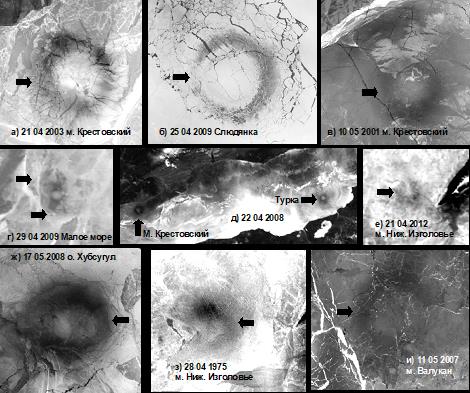 Under-ice measurements of currents and the thermal structure of water under the rings demonstrated that there is an anticyclonic eddy in the geostrophic area of the lake under the ice, which is transporting warmer deep water to the lower surface of the ice, and that leads to the ice thawing from underneath. An interesting lenticular area of mixed water is being formed under the ice (fig. 3) [N.G. Granin, V.V. Kozlov, Y.A. Tsvetova, R.Y. Gnatovsky. Field studies and some results of numerical modeling of a ring structure on Baikal ice // Proceedings of the Russian Academy of Sciences, 2015, 461, № 3, p. 343–347]. But the following questions remain open: why is the ice thawing from underneath in a ring, and where do these vortexes under the ice come from? The given project poses the task of considering the problem in a broader way and studying not only the Baikal rings from the hydrodynamic point of view, but also other possible types of mesoscale vortex movements under the ice, their causes, the dynamics of their influence on the ice. The project will examine under-ice topographic eddies, under-ice canyon eddies, under-ice radiative vortexes, global under-ice water circulation in mesoscale water bodies. 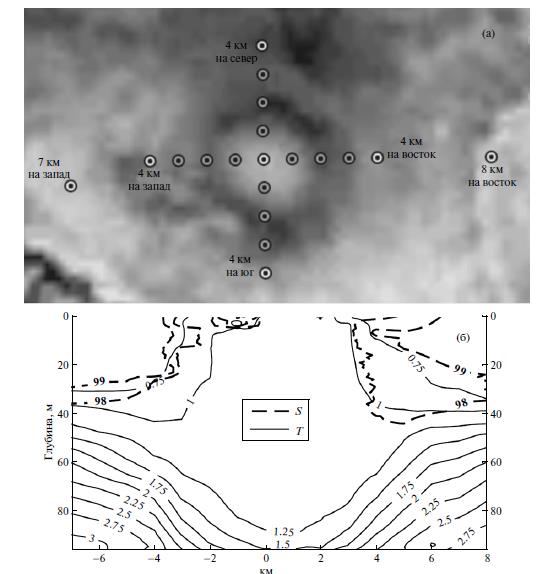 Interestingly, the presence of ice cuts the wind effect, which leads to the appearance of those weak vortex structures in their pure form in the dynamics of currents, while in the case of open water, they become heavily blurred and “smeared” by wind. Investigation of the under-ice Ekman boundary layer is, undoubtedly, one of the most important tasks of the project, since it is there where the interaction of the geostrophic eddy and ice takes place, influencing the processes of ice thawing and growing.

Research of the new interesting phenomenon in geophysical hydrodynamics defines the relevance and significance of the project.

Abstract of the report on the project results (2019):

The problem concerning the structure of the under-ice Ekman layer above a geostrophic vortex in spinning homogeneous liquid was solved. The idea of stating the task is that the movement of water under a ring is initiated by the eddy in the geostrophic area beneath. It is shown that the thawing of ice from below in the shape of a ring is due to the formation of a vertical circular Stewartson layer on the lateral surface of the geostrophic eddy and, as a result, the appearance of a divergent vortex in the intersection area of the vertical cylindrical Stewartson layer and the horizontal under-ice Ekman layer. It is demonstrated that warm deep waters rise into the Ekman layer along the inner side of the Stewartson layer, after which they “scatter” themselves in a circle as a divergent vortex. The most intense horizontal and vertical movements of water occur in the circular area of the intersection between these layers (fig. 4). 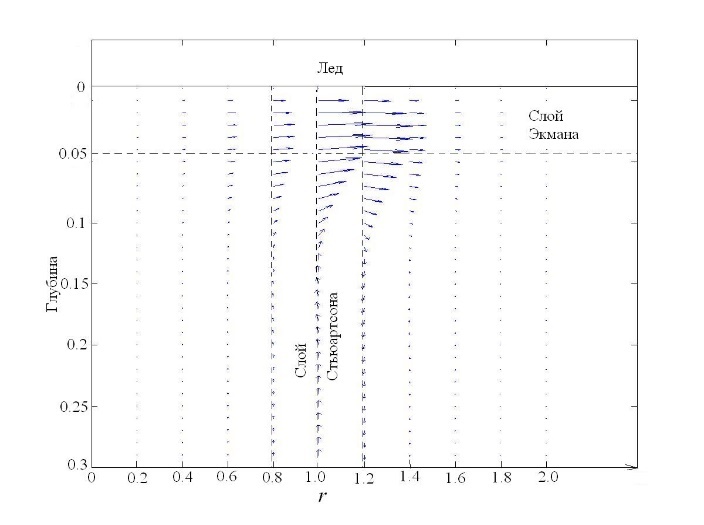 Fig. 4. A vector field of dimensionless velocities in the vertical radial plane in the intersection area between the Stewartson layer of a topographic vortex with the under-ice Ekman layer [Zyryanov V.N., 2019].

A non-linear theory of ice growth was developed, taking into account the non-linearity of the ice thermal conductivity coefficient and the pumping effect at the cost of air temperature fluctuations and, most importantly, considering the flow of heat from water into ice. In this case, the Stefan task leads to a non-linear Abel equation of the second kind, whose analytical solution was found by the asymptotic methods for the case of small relation between the heat flow in water and the heat flow in ice.

The project involved intensive expedition works in 2019. There were three expeditions to Baikal – two of them in winter and one in summer, and a winter trip to Finland in order to participate in winter works on ice on the lakes of Pääjärvi, Taka-Killo and Lovonjarvi (Lammi biological station). Field work provided an interesting experimental material. During the summer expedition to the “G.Y. Vereshchagin” research ship on Baikal near Cape Nizhnee Izgolovie, for the first time, two Argos buoys were launched with the GPS navigation system through the French satellite network Argos (fig. 5). Although the buoy experiment did not give a clear answer regarding the existence of the vortex in summer – the buoys did not follow the expected circular trajectory, one can see some columnar structure through the alleged vortex area in the vertical cross-sections of temperature and oxygen fields. 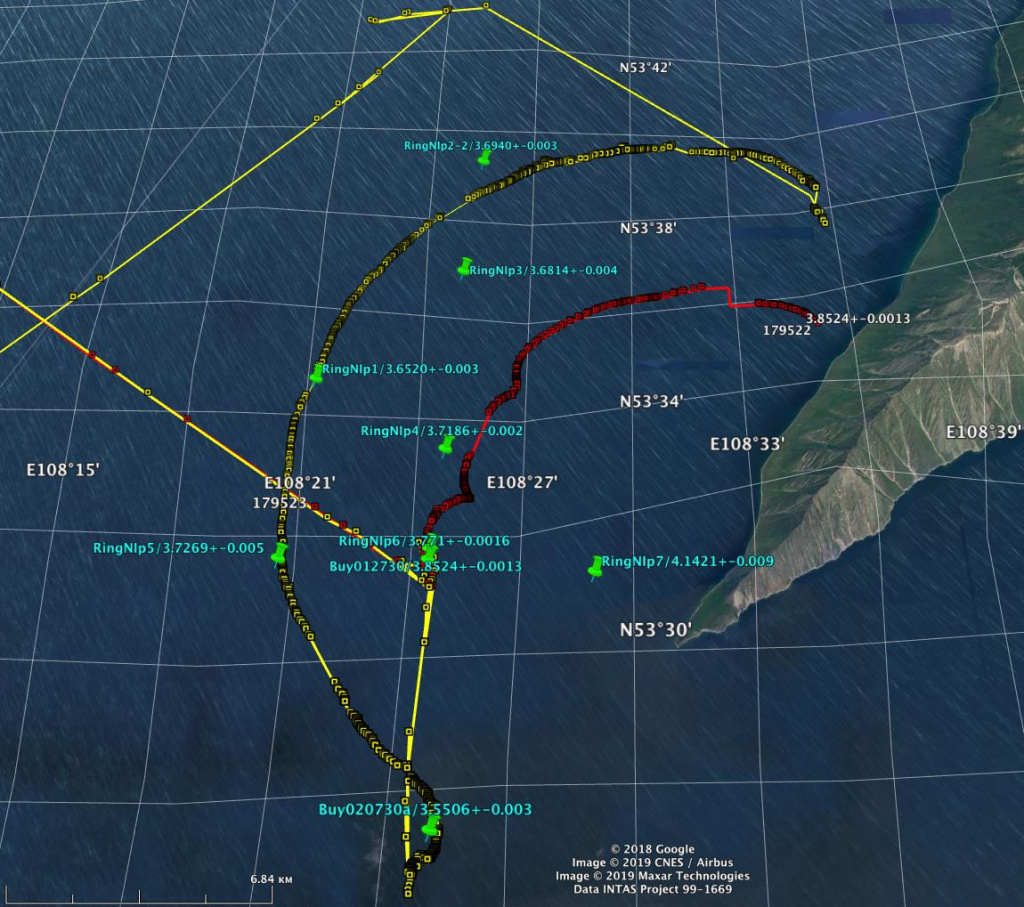 Laboratory experiments were carried out on a rotating installation in the Hydrodynamics laboratory of WPI RAS. The experiment had the task of tracking the movement of water under the ice when thawing. This task statement is directly related to radiative vortexes, that appear under the ice caused by the heating of under-ice water layers by the sun radiation. The experiments helped to discover that liquid begins to rotate in an anticyclonic way when lowering as a result of ice thawing. Thus, the experiment confirmed that in mesoscale areas of pure ice without snow, as well as in ring structure areas, anticyclonic vortexes will be generated by the convection caused by the radiative heating of water.