Geophysical hydrodynamics of discrete vortices and vortex patches: applications to the atmosphere/ocean dynamics

The majority of the important findings related to the description of natural geophysical phenomena (atmospheric blocking at mid-latitudes, air flow over mountains and ocean flow around islands, generation of topographic vortices, meandering jet flow, breaking of internal waves, merging and separation of vortices, etc.) are either way received using theoretical estimates and model calculations. These considerations provided a basis for the project. The wide variety of problems in the first section of the program are devoted to researching regularities of discrete and distributed vortices at the theoretical level. We are planning to receive new families of stationary states of the vortex system and examine their stability. The second section will present the results of numerical modeling of behavioral characteristics of such natural objects as the stratospheric polar vortex, the Lofoten vortex of the Norwegian Nordic Sea Seas and intratherocline intrathermoclinic vortices in the ocean. We will explain the observed properties of their evolution under the impact of external factors. 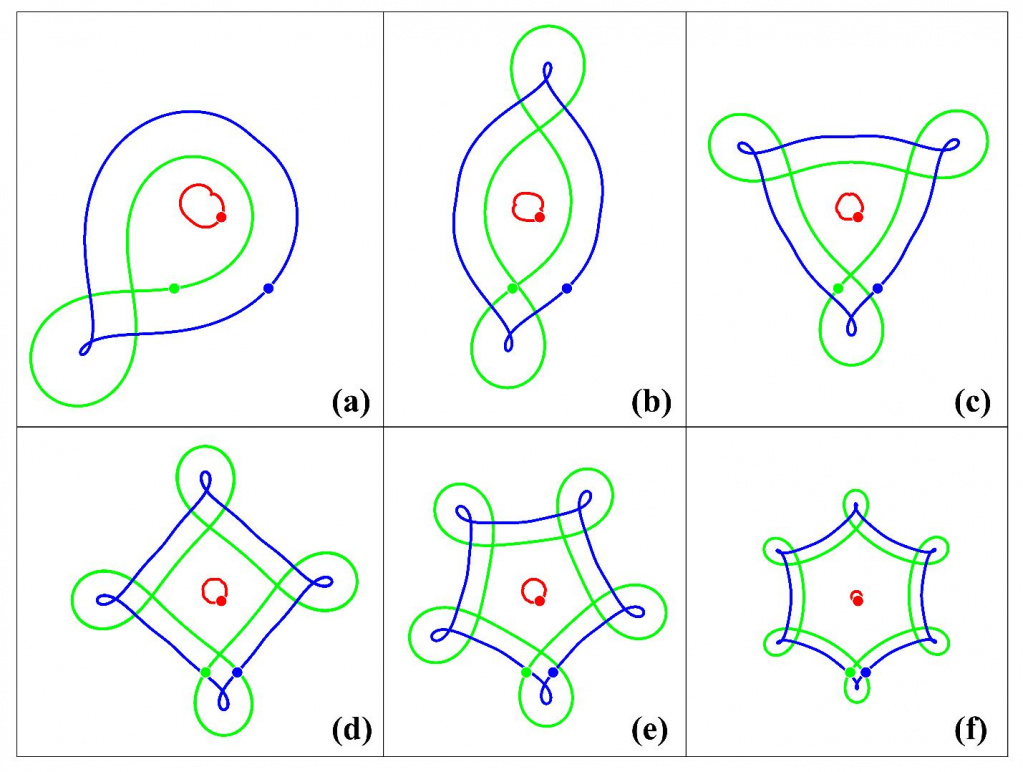 Within the three-layer quasi-geostrophic model, a family of stationary solutions was received – n-modal choreographies, representing closed trajectories of three vortices: two of them –  cyclonic and anticyclonic – belong to the middle layer and are depicted in the drawing, respectively, by the green and blue curves, and one, cyclonic, is in the upper layer (the red line); the lower layer is passive. Round markers correspond to the initial position of the vortices. This numerical experiment (and many others) provide an understanding about the interconnection mechanisms between intrathermoclinic lenses and a surface vortex in the ocean.