MainResearchProjectsPossibilities of flash flood forecasting based on data from an automated flood monitoring system in ...
Science Areas Projects Research Facilities

The project is devoted to the study of the flash floods formation on the rivers of the Krasnodar Territory and the development of systems for operational forecasting of rain floods. The main objective of the project is to assess the possibility of development of automated methods for predicting water levels in the rivers of the Western Caucasus based on machine learning methods and artificial intelligence using data from an automated flood monitoring system in the Krasnodar Territory. The relevance and significance of the study is determined by the significant damage and losses of lives during floods and, accordingly, the need to develop methods and approaches to short-term hydrological forecasting for flood-prone regions of Russia.
The idea of the project is to test the formal-mathematical models for creating methods of short-term hydrological forecasting under the conditions of information and technical constraints that make it difficult to use physical and mathematical models of flow formation. The expected results of the project will provide a significant contribution to understanding the regularities of the level regime of the rivers of the Krasnodar Territory and could complement the system of operational forecasting techniques in this region.

During the first project year, the databases comprising hydrometeorological observations, weather forecasts, and climate reanalysis were created. The water level observations from the regional automatic flood monitoring system EMERCIT were ingested in the database. The quality control and filtering algorithm were applied to the water level time-series. 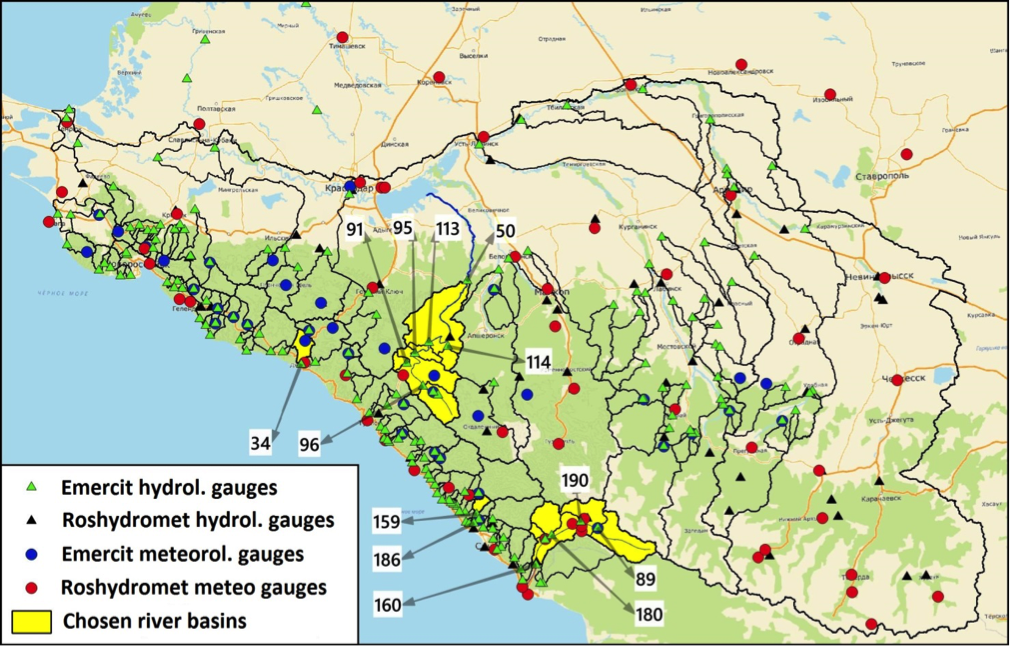 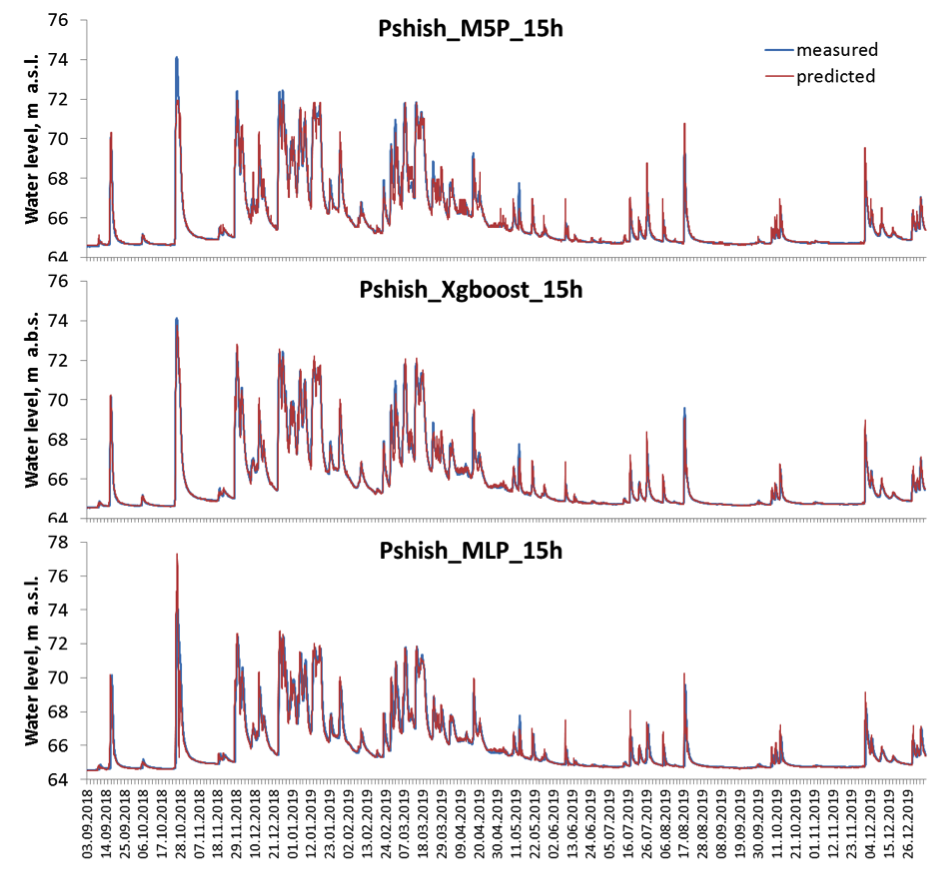 Figure 2. Measured and predicted water level values (15 hours ahead) for the Pshish River at gauge №50 during test period

For the Zapadnyj Dagomys river, the Kinematic-wave-based Geomorphologic Unit Instantaneous Hydrograph (KW-GIUH) model was applied. Using the precipitation forecasts by the COSMO-Ru7 model  and KW-GIUH parameters calibrated on the 25 June flash flood, the flash flood of 24-25th of October 2018 hindcast was created and proved to be efficient (Fig. 3). 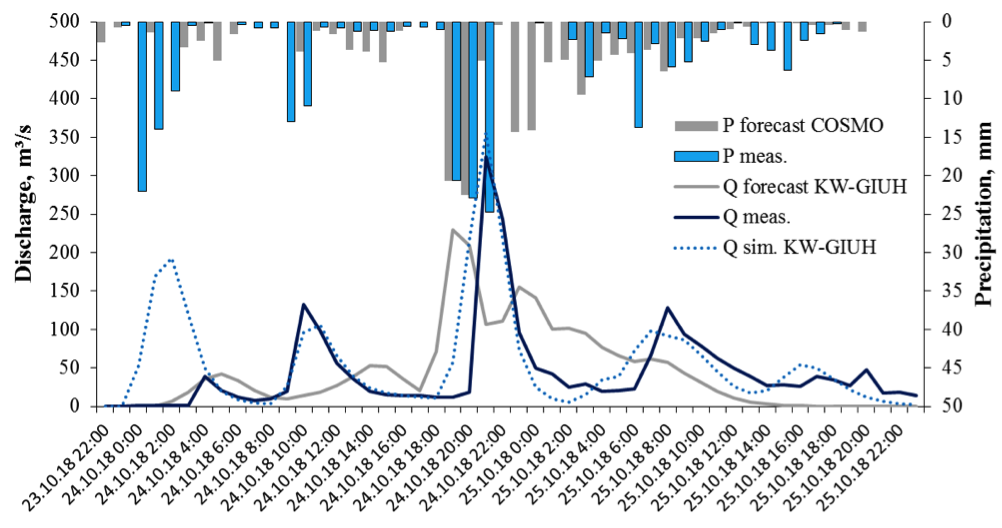 Figure 3. Forecasted and measured precipitation, hindcast and actual discharge rates during the flash floods of 24-25th of October 2018 (the Zapadny Dagomys River)

The ICON-EU model intensive precipitation forecasts’ analysis has shown the model adequacy to reproduce the majority of cold-season precipitation events (fig. 4). Hence, its forecasts will be consequently employed to forecast the river stage by the machine learning models. Given data availability and technical limitations to employing physically-based runoff formation models, the attempt to use formal data-driven models for short-term hydrological forecasting is highly promising. 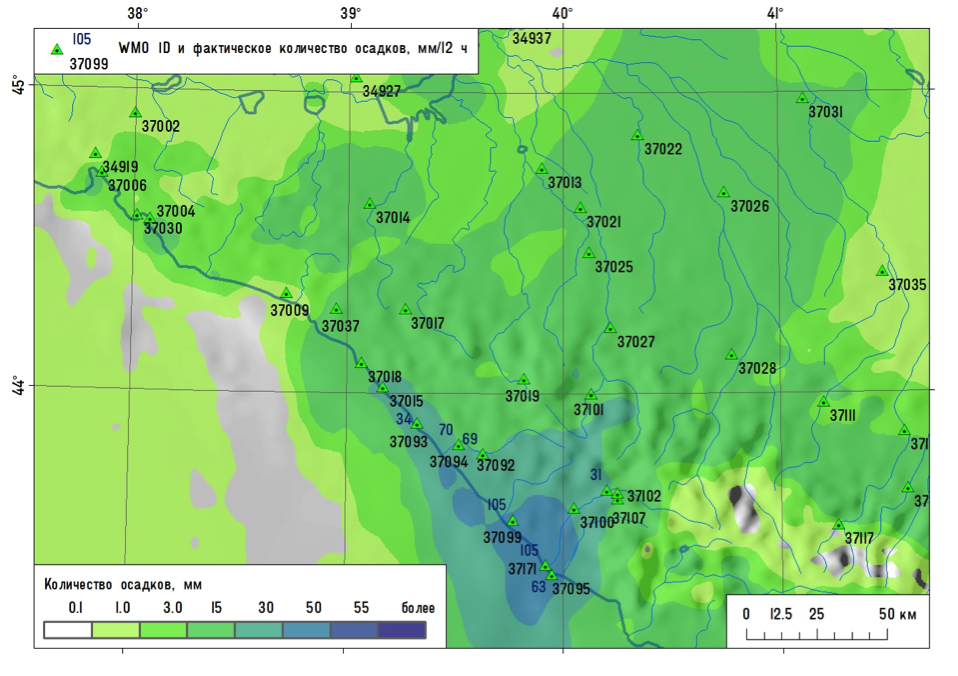 The automatic flash flood identification procedures were developed based on 10-minute river stage time-series and three categories of flash-floods were identified by using principal component analysis (PCA) and clustering. Additional data from the ERA5 reanalysis dataset was employed for this, which was previously tested against local weather observations’ data.

The project results will provide significant insight into the Krasnodar region river stage regime and might be included in the regional operational forecasting system.