Current paleogeographic information suggests that in the late glacial period[1], as well as during the whole Valdai glaciation, the oscillation of the Caspian Sea level (CSL) was at least 30-40 m, which is several times as high as the sea level fluctuation in the Holocene. The physical mechanisms (climatic or other ones) that could be the reason for such an extraordinary variability in the sea level are still unrecognised.

The project is aimed at researching the hydrological, climatic, geomorphological and glaciological factors of extreme paleohydrological phenomena at the Caspian catchment during the late glacial epoch, and elaborating methods of modelling possible scenarios of their formation. The research will be focused on the physical mechanisms of the transgressive stages of the CSL oscillation in the given period with the maximum levels being approximately 0¸+20 m abs. height, i.e. more than 30 m higher than today’s level.

The novelty of the project consists in applying the methods of physically-based modelling of hydrological processes and paleoclimate, together with current paleoclimatic and palaeographic research results, in order to analyse the extraordinary paleohydrological phenomena and reconstruct physically realizable scenarios of the transgressive stages in the CSL oscillation.

In order to achieve the aim of the project, the research is planned to be carried out in the 3 key areas: hydrology, paleoclimate and palaeography.

For each of the areas, the following results should be obtained in the course of the project:

The project team brings together specialists in modelling of the terrestrial hydrological cycle and the CSL fluctuations (Water Problems Institute, RAS), in climate research and modelling, extraordinary paleoclimatic phenomena analysis (the MSU department of Meteorology and Climatology, A.M. Obukhov Institute of Atmospheric Physics, RAS), palaeogeographic research, reconstruction of geomorphological processes during extraordinary paleohydrological phenomena formation (the MSU department of Geomorphology and Palaeography). Leading project researchers have dozens of cited publications in top-ranked journals. Young researchers and graduate students make up half of the creative group.

Abstract of the report on the project results in 2019:

Completed research and the main results obtained in 2019

1.1.       Water flow from the nearby basins can be excluded as a factor of the Upper Volga and Oka River water balance. Based on the field study of the confluence of the Volga River and the Teza River (before the water gap near Plyos), the absence of morphological traces of concentrated powerful runoff was demonstrated. Absence of later water sediment at that level (30 m above the Volga River) emphasises the impossibility of existence of two dam lakes in the MIS that could flow over the Galich-Chukhloma Uplands, i.e. the Volga debacle near Plyos happened much earlier. Thus, the hypothesis about considerable changes in the Upper Volga and Oka River catchment during the late glacial period and glacier dam water flows from nearby basins was not justified.

1.2.       Quantitative assessment of the amount of melt glacier water flowing into the Upper Volga was carried out. It demonstrated that during the deglaciation period (19-16,5 thousand years ago) the total melt water flow into the Upper Volga could equal 55-70 km3 a year, according to different models of the glacier. However, in reality, the total Volga River runoff was increasing significantly less, since the growth of melt water inflow was to a great extent compensated for by the reduction in the runoff due to the decreased precipitation.

1.3.       Quantitative assessment of the total river runoff from the Upper Volga and Oka River basins was carried out on the morphological characteristics of the paleo riverbeds. Median estimate of the paleo runoff volume for the Upper Volga basin turned out to be equal 142 km3/year, while for the Oka River basin it was 82 km3/year, which is 1,5 and 2,0 times, respectively, higher than today’s values. In the Oka and Upper Volga River basins [Sidorchuk et al., 2009] and in general in the centre of the Russian Plain [Panin, Matlakova, 2015], big paleo riverbeds were being formed in the period from 18 to 13 thousand years ago. The obtained runoff estimates should be attributed to this period. 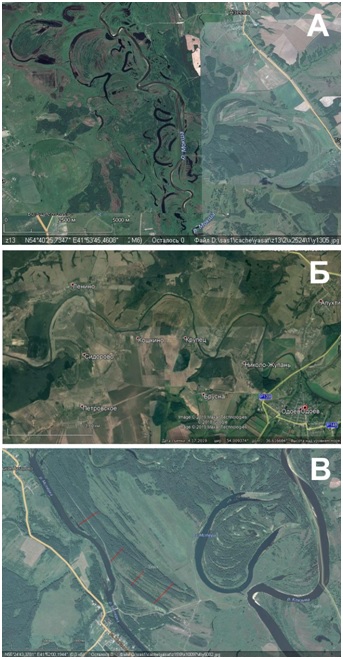 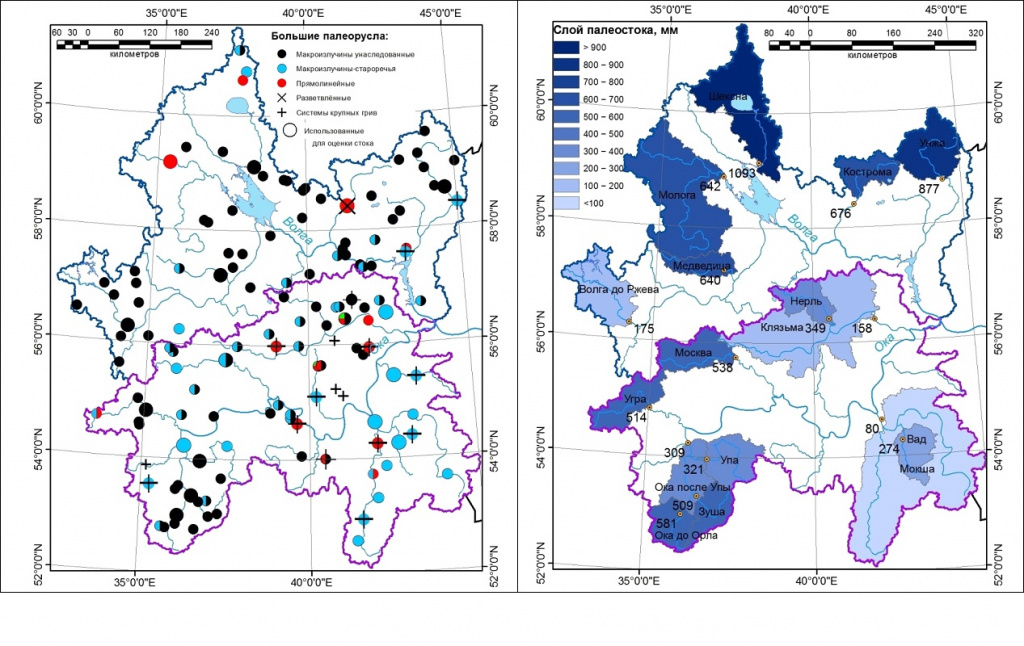 The scheme of distribution of the increased late glacial runoff of the atmospheric origin in the Upper Volga and Oka basins (left) and the runoff in the basins with an area of more than 5000 km2 evaluated according to the paleo channel parameters (right).

1.4.       Field materials were received in order to specify the chronology of the increased runoff stage during the late glacial period. In particular, the first material for dating the dead macromeander channel in the Upper Volga basin was obtained and presented to the laboratory. The key area on the Lower Moksha River was studied in detail by digging. AMS dating will allow us to specify the beginning and the end of the increased runoff stage. The latter is especially important, as it is still unclear whether the increased runoff continues in the late Dryas or its amount had already reduced to the values typical of the Holocene.

2.1.                 A data archive with the results of paleoclimate numerical modelling was created in the projects PMIP3 and PMIP4 based on the experiment series with climate models.

2.2.                 Based on the experiments with the GCM LMDZ 3.3, combined with the earth surface model ORCHIDEE, we analysed the results received for the background conditions of MIS3. It was shown that the amount of precipitation in the Caspian basin had been reduced compared to the current climatic condition by approximately 30–40%. This does not only prevent the CSL rise – but also indicates (together with the conclusions about the absence of serious anomalies in the evaporation regime) that the CSL was reduced in that epoch. The findings mainly correspond to the results obtained earlier for the peak glaciation conditions 21 ka ВР [Kislov, Toropov, 2011]. This can be explained by the fact that the baseline conditions for MIS2 and MIS3 are similar.

2.3.                 Based on the experiments piControl and LGM, we assessed the changes in the main hydroclimatic characteristics at the Caspian catchment during the Last Glacial Maximum (LGM), compared to the “controlled” experiment on the climate model data. It was demonstrated that in the period under study there had been a decrease in the “climatic” Volga River runoff (difference between precipitation and evaporation): 8 out of 9 models showed a reduction in the runoff during LGM. That is, precipitation decrease was not compensated for by a reduction in the evaporation layer at the Volga River catchment. An increase of the runoff is observed only in the southern region, whereas on average the catchment runoff was reduced by 40 mm (about 25%). At the same time, the evaporation layer from the Caspian Sea surface also decreased, which could make up for the humidification deficit at the catchment area. In order to assess the changes in the Caspian water balance, it is necessary to conduct further calculations, using hydrological models. 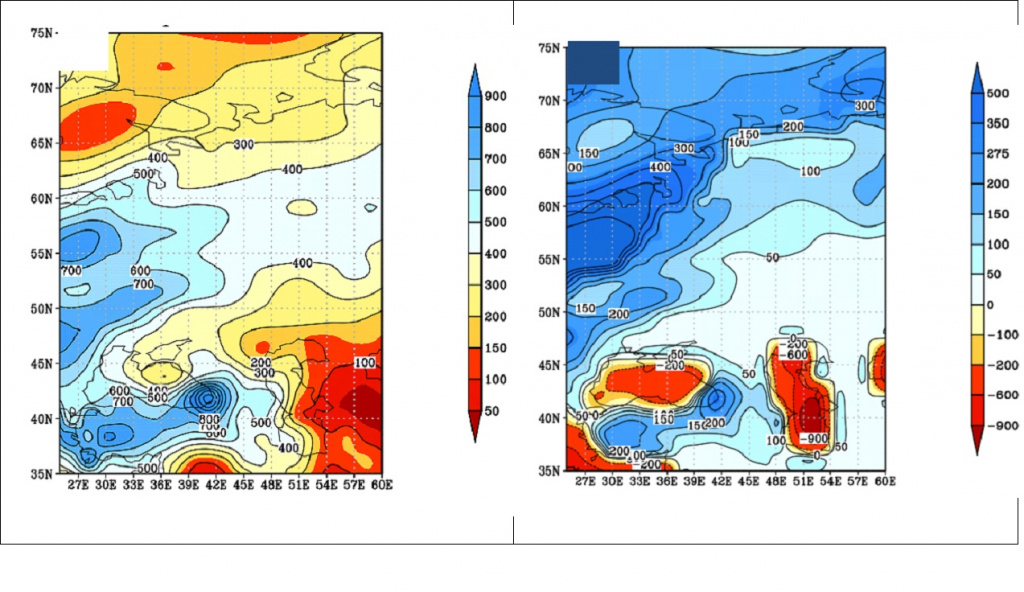 The distribution of the annual precipitation (left) and “climatic” runoff (difference between precipitation and evaporation; right) during the Last Glacial Maximum according to the MPI data on the territory of the Eastern-European Plain.

3.1.       For the first time, there has been developed a distributed physically-based hydrological model for the whole Volga River basin. The model allows one to reproduce the water regime of the Volga River basin with a high spatial (~1500 km2) and time (1 day) resolution. Information support of the model is provided by the standard hydrometeorological monitoring data and the available global datasets on the underlying surface characteristics.

3.2.       Numerical experiments were conducted to test the model, which showed good and satisfactory, according to the accepted performance criteria, quality of model estimates. 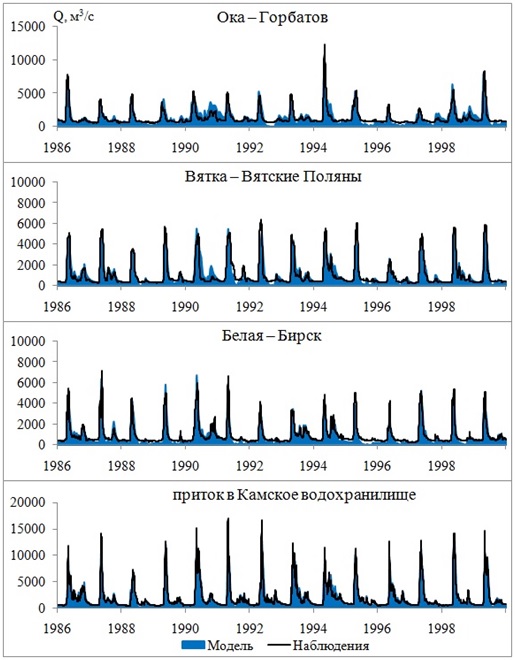 The average daily observed and modelled hydrographs at the gauging sections of the Volga basin rivers over the model verification period (1986-1999).

For the result 1.3 (continued)

The scheme of distribution of the increased late glacial runoff of the atmospheric origin in the Upper Volga and Oka basins (left) and the runoff in the basins with an area of more than 5000 km2 evaluated according to the paleo channel parameters (right).

The distribution of the annual precipitation (left) and “climatic” runoff (difference between precipitation and evaporation; right) during the Last Glacial Maximum according to the MPI data on the territory of the Eastern-European Plain.

The average daily observed and modelled hydrographs at the gauging sections of the Volga basin rivers over the model verification period (1986-1999).


[1] The term “late glacial period” indicates the epoch covering the final stages of the late Pleistocene glaciation of the East European Plain (the so-called “Valdai glaciation”) and the Preboreal climate period of the early Holocene.