The structure of river systems and basin morphology: the DEM based analysis, possibilities of three-dimensional modelling

The project explores structural-functional interrelations in river systems within different time scales – synoptic (a flood event), historical (a multi-year cycle of water regime), geological (basin evolution). Methodologically, the research is based on recent models of the three-dimensional structure of river systems and basin relief, which use basic physical principles of conservation and extremality (minimum energy dissipation). Generally accessible medium-scale digital elevation models form the informational-technological foundation of the study, as well as other kinds of geodata and the up-to-date GIS toolkit.

The main tasks are: adaptation and modernisation of the model of “a self-organised fractal river network”, evaluation of the impact of climatic, geomorphological and geological factors, as well as reproduction of the time dynamics and its formation, testing the numerical experiment methodology; elaboration and systematisation of the methods and technological toolkit that serve to analyse the river system structure and basin morphology, based on the generally accessible medium-scale digital elevation models; improvement of the river system typology, based on the related graded classification of streams and water divides; development of indication methods that help to evaluate hydrological characteristics and parameterisation of hydrological models in unexplored areas.

The main finding of the project should be assimilation of the global experience of working with three-dimensional river system models. Creating a methodology of verification of similar models should become one especially important result, since their development is impossible without this. The results of complex in-situ studies of the slope drainage network (the so-called “drain”) will serve to interpret the findings of the analysis and modelling, and will also form a foundation for conducting further research.

Field experimental research of the primary hydrographic network of several small river watersheds was carried out in various physical-geographical conditions. The works included: in-situ investigations and description of the first-order streams (1-3 by Horton-Strahler); detection and tracing of the unordered slope drainage network (drains, water tracks); implementing joint high-frequency hydrometric and hydrochemical surveying in basins; realising aerial photography and filming of basin sections from unmanned aircraft. The research was conducted on the basins of the Ugolnaya-Dionysia R. (the Anadyr Estuary basin in the Chukotka Autonomous District), the Nelka R. (the Gilyuy basin in the Amur region), the Tsanyk (the Caucasian Black Sea coast basin in the Krasnodar region).

The so-called indication methods of assessing water and sediment runoff from the southern slope of the Greater Caucasus was tested, based on applying the total length of the river network and the value of the hydromorphological coefficient (γQ) as indicators. The coefficient was equivalent to the length of the river network that is necessary for forming a long-term average discharge in 1 m3/s. The method was designed and largely implemented in the 1970-90s in the unexplored regions of the Far East and Siberia. The given index, calculated for the 37 partial watersheds to the hydrological gauges, demonstrated spatial sustainability in its variation along the Russian and Abkhazian coast. This helped to realise zoning of the studied region and calculate the norms of water and sediment runoff for 75 rivers of the Caucasian Black Sea coast that are longer than 10 km. 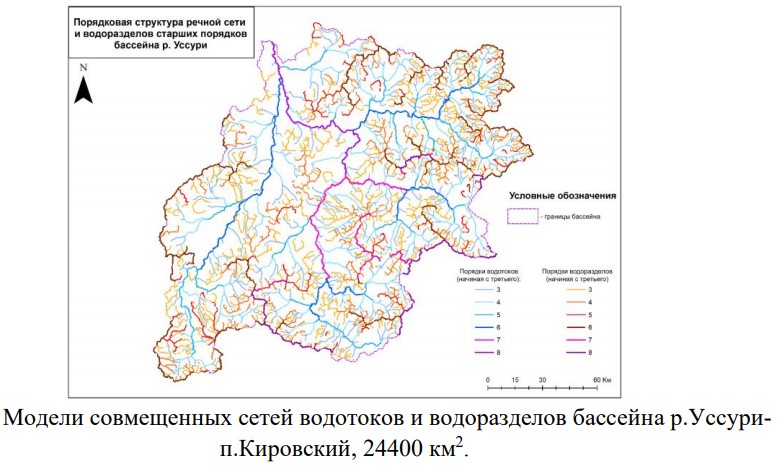 Models of the joint stream and divide networks of the Ussuri R.-Kirovskii basin, 24400 km2 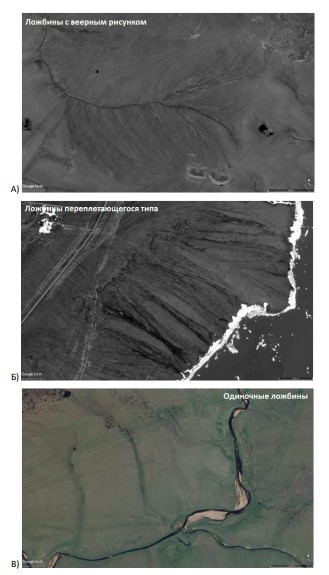 The characteristic shape of different types of the unordered drainage network: a) fan-patterned hollows; b) hollows of the intertwining type; c) solitary hollows.