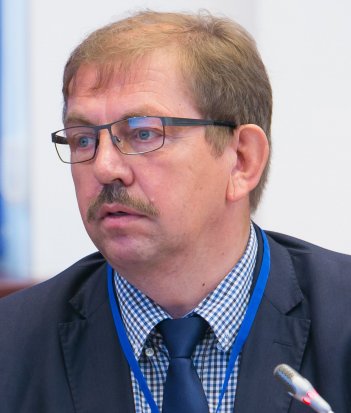 Since 1993 – Water Problems Institute of the Russian Academy of Sciences, Moscow:

§ Head of the Laboratory of Surface Water Modeling (since 2000)

Senior Scientist, Developer of the Federal Construction Standards and Regulations in Engineering Hydrology

Member of scientific committees and societies:

-       International Association of Hydrological Sciences (IAHS). Since 1999 to 2012 – a National Representative in IAHS,

Member of the editorial board of scientific journals:

-       Russian Meteorology and hydrology (in Russian and English),

-       Hydrometeorological Research and Forecasting (in Russian)

Dr. Bolgov is a Scientific Secretary of the Scientific Council for the Federal Agency of Water Resources (Russian Ministry of Natural Resources).

Dr. Bolgov is a specialist in the field of regularities of hydrometeorological processes and phenomena and development of methods for their modeling, forecasting and management. The most difficult problem of modern hydrometeorology is runoff estimation and forecasting in the conditions of the uncertainty of climate changes. In the Bayesian ideology of estimation and forecasting, Dr. Bolgov proposed and developed a method for the water resources assessment, taking into account the non-stationary character and uncertainty of the forecast of climatic changes.

Dr. Bolgov was the scientific leader of many projects. Among them there are:

•   Co-director, NATO ARW "Stochastic models of hydrological processes and their application to the problems of environmental preservation” Moscow, 1998.

•   Investigation and factors of the dangerous hydrological situation on 6-7 July 2012 in the Krasnodar region, 2012.

•   Russia-China project “Investigation of the factors and damages after extreme flood on the Amur River in 2013, 2015”.

•   Analysis of the water resources formation in the Baikal Lake watershed during an extreme low-flow period, 2016

•   Investigation and factors of the dangerous hydrological situation in July 2019 in the Irkutsk region, 2019.