How do intrathermocline lenses interact with a large-scale surface cyclone?

The Mathematics journal has published a series of articles by Mikhail Sokolovskiy (WPI RAS) and the co-authors. They focus on mathematical modeling of vortex interaction in the North-East Atlantic region. The research is carried out using a three-layer quasigeostrophic model

The characteristics of the hydrological regime in the north-eastern part of the Atlantic Ocean at the intermediate depth levels of 500-1600m are defined by interaction with waters of the semi-enclosed Mediterranean Sea. These anomalous waters, having high temperature and salinity values, are carried by a near-bottom gravity current through the narrow Strait of Gibraltar with discharge. Then, they spread westwards, being pressed to the continental slope of the Iberian Peninsula by the Coriolis force as a current made of several jets at intermediate depths.

As a result of the instability of the flow over the canyons of the slope, part of the jet becomes separated and discharged to the depths of the corresponding density. As a rule, this leads to the formation of intrathermocline lenses, which are isolated vortices (mostly anticyclonic, but sometimes cyclonic) located at intermediate depth levels (600-1600m). Cyclonic and anticyclonic vortices are generally formed simultaneously as part of a dipolar structure.

The given works study the mechanisms of interaction of such dipoles with a large-scale surface cyclone within a three-layer quasigeostrophic model. The main parameters of the model correspond to the conditions of the North-East Atlantic region. At the first stage of the research, the authors used approximation of point vortices, at the second – approximation of distributed vortices, when a surface cyclone is modeled by a vortex spot of the first layer, intrathermocline lenses – by vortex spots of the middle layer; the lower layer is supposed to be dynamically passive. 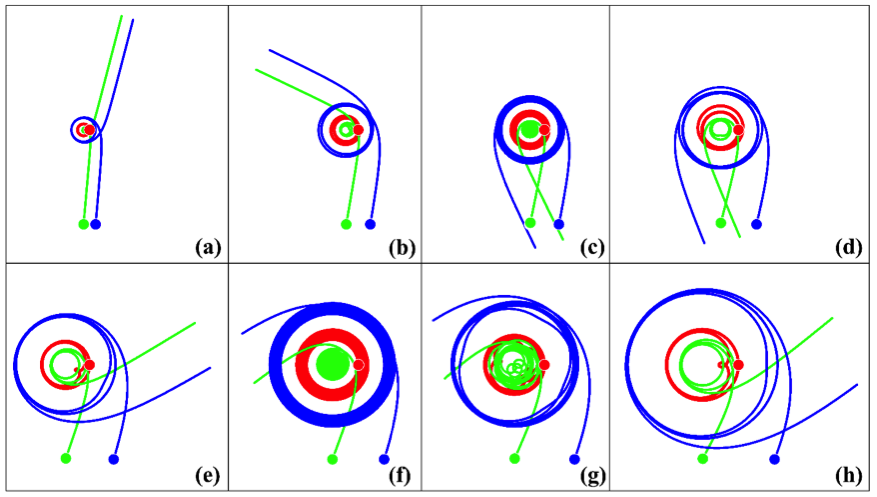 The first figure demonstrates trajectories of point vortices when a pair of intrathermocline vortices occur (the green and blue lines represent the trajectories of the cyclonic and anticyclonic lenses, respectively) in an initially motionless cyclone of the upper layer (its trajectories are colored red) with different values of original distances L between the lenses. Round markers correspond to the initial positions of the vortices.

In all of the considered cases, the pair of lenses begin to move towards the surface cyclone, and then sooner or later leaves its area and moves away from it indefinitely. At the finite movement stage, the trajectories of the intrathermocline cyclone are always located inside the circular area shaded by the trajectories of the surface vortex, while the trajectories of the anticyclonic lens remain within the outer circle. Thus, at this phase of the movement, there is a vortex structure of a two-layer cyclone with a “tilted axis” and a peripheral anticyclonic lens producing collective counterclockwise rotation. An interesting feature of vortex interaction in this case is that although the period of finite movement realization is a monotonically increasing function of L, the number of full revolutions within circles is an irregular function of L. The latter is clearly seen in panels (c) and (f) with an anomalously large number of vortex revolutions in their collective cyclonic rotation initiated by a surface vortex. 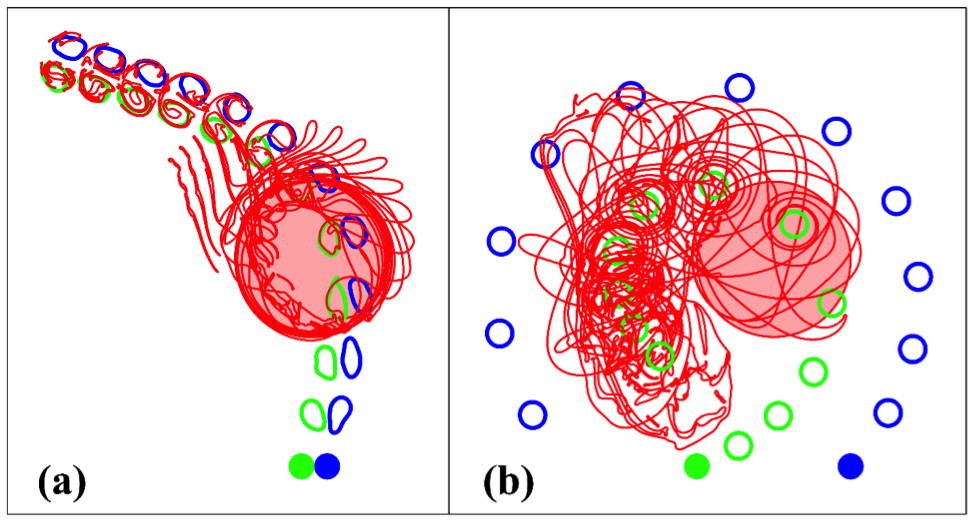 The second figure illustrates the results of calculations for finite size vortices, when the radii of the lenses equal 32 km – the internal Rossby radius of deformation characteristic of the North Atlantic region, and the linear sizes of the surface cyclone are 6 times larger. The coloring has the same meaning as in the previous figure, and the initial configurations are colored. Here, one can observe configurations of vortex spots only for the cases of two values of L – “strong” and “weak” pairs of lenses in panels (a) and (b), respectively. In the first case, the significant deformation of the surface vortex is caused by a shift resulting from the dipole of the middle layer. Outer liquid intrudes into the cyclone, while the dipole moves to the west of the cyclone, and then recedes, tearing off and carrying two fragments of this cyclone. Most of the surface cyclone stays behind, but with considerable filamentation (formation of vortex threads). Qualitatively, the results of interaction here and in panel (b) of the previous figure are similar. In the case of a weak intrathermocline dipole, the cyclonic vortex of the middle layer is seized by the surface cyclone with formation of a two-layer cyclone; the anticyclonic lens rotates along its periphery.

The refereed articles analyze vortex interaction for the case of a weaker cyclonic lens, compared to its anticyclonic partner. As mentioned above, this situation is more typical of the real ocean conditions. All the movements of such vortex structures are finite. The authors discovered the phenomenon of formation of strictly/approximately periodic motion for the discrete values of parameter L for point/distributed vortices.

The results of the study of vortex dynamics require experimental confirmation by in situ instrumental measurements in the ocean, as well as using the analysis of the trajectories of Lagrangian mini-drifters.

Оther publications
All publications
How do intrathermocline lenses interact with a large-scale surface cyclone?
WPI RAS substantiated the possibilities of reducing the risk of catastrophic floods on the Eastern Sayan rivers