Water Problems Institute of the RAS carried out research on flood risk in the Tulun area (the Irkutsk region, Russia) and the conditions which led to the catastrophic flood on the Iya R. that occurred in the summer of 2019

General results of the research are available on the website of the Ministry of Education and Science.

A series of floods on the rivers of the Irkutsk region which occurred in the summer of 2019 as a result of severe rain floods became one of the most devastating hydrological events of the regional scale in Russia over the last years. According to the data provided by the Government of the Irkutsk region, more than 70 municipalities were fully and partly flooded, including 4 cities, 67 rural settlements, about 60 villages and horticultural societies. According to some estimates, the damage amounted to more than 35 billion roubles, including 0.5 billion roubles channeled to repair the damage caused to the agriculture. The left-bank tributaries of the Angara R. were the most affected: the Belaya, Oka, Iya, Kitoy and Irkut rivers descending from the Eastern Sayan Mountains. The situation was particularly grave on the Iya R. in the area of Tulun, where the flood was disastrous.

WPI RAS aimed to study the risk of floods on the left-bank tributaries of the Angara R. and analyze the conditions of formation and progress of the extraordinary flood, based on the joint use of the methods of physical-mathematical and numerical hydrodynamic modeling.

At the first stage, the information-modeling complex ECOMAG (WPI RAS) served as a basis for designing a model of river runoff formation in the basins of the left-bank tributaries of the Angara R. This model showed that in the conditions of over-wetted soil, runoff losses in absorption to soil were minimal in the most territory of the basin and, in particular, in the Iya R. catchment. Considering extreme precipitation (more than 200 mm over several days), it became an additional factor leading to the formation of an extremely high flood. The model also helped to obtain estimated hydrographs and assess the maximum Iya R. discharge. At the peak of the flood, it amounted to 5640 cubic m/s, which is nearly 1500 cubic m/s more than the historic high of 1984. 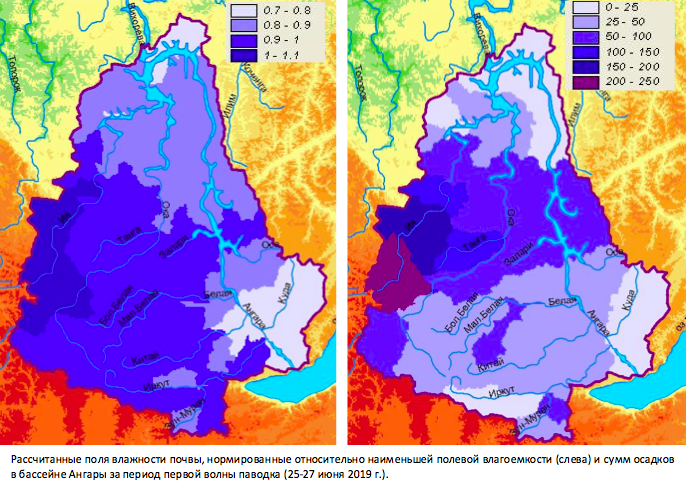 Calculated fields of soil moisture normalized against the least field moisture-holding capacity (on the left) and the amount of precipitation in the Angara R. basin over the period of the first flood wave (25-27 June 2019).

At the second stage, the software complex Stream 2D (WPI RAS) served as a basis for designing a numerical two-dimensional hydrodynamic model of the flow in the channel and floodplain of the Iya R. in the Tulun area. It helped to analyze the dynamics of the catastrophic flood wave. The results of modeling and the comparative analysis of depth fields and flow velocities allowed one to reasonably argue that the existing dams protected the section of the riverbend in the city above the road bridge to the discharge of approximately 3500 cubic m/s. If this value is exceeded, the flow goes to the floodplain. At the peak of the flood, with the discharge of 6000 cubic m/s on the approach to the city, the water layer of more than 2 m deep flowed over the dams at long sections. The dams did not pose a significant barrier to the flow. The overflowing of the dams was accompanied by an intense transformation of the flood wave through accumulation of considerable amount of water (over 10% of the total flood volume) in a wide floodplain in the city area. Therefore, the maximum discharge at the section of the hydrological gauging station amounted to 5700 cubic m/s, which corresponds to the results obtained using the hydrological model. The elements of environmental engineering, as well as the development in the floodplain of the Iya R. in the city riverbend area, had little impact on the maximum flooding levels in Tulun. It is also established that a 1-2 m deep logjam (the depth of the flow is 10 m) before the road bridge did not have a significant influence on the water surface levels above the bridge. It did not result in backwater, since in this case, blocking of the flow section is insignificant. High speeds of the flow and its skewed jets became the reason for the support erosion in the left bridge span, however, the bridge itself did not pose any serious obstacles to the water flow.

The works clearly illustrate the high effectiveness of the joint use of modern tools of hydrological and hydrodynamic modeling when researching the conditions of formation of catastrophic floods and decision-making support tools to increase the safety of the territories affected by such events.

The dynamics of flood wave distribution on the Iya R. that led to the flooding of Tulun in the summer of 2019 (results of modeling):

Simulated hydrograph of the Iya R. at the gauging section in Tulun. 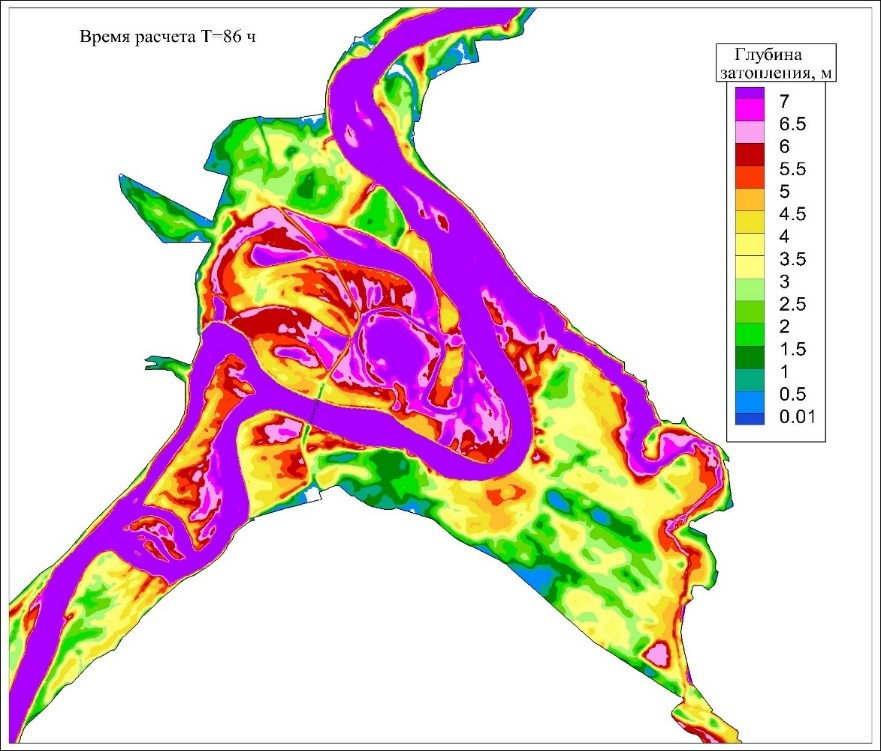 Fig. Distribution of maximum depths at the peak of the flood (results of modeling) 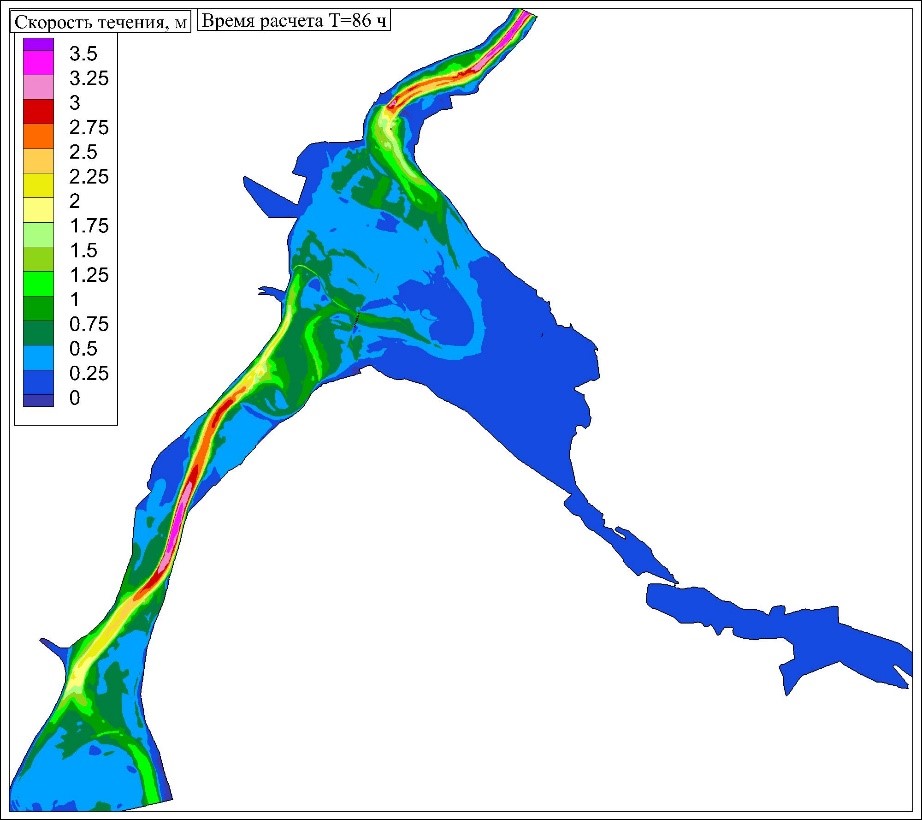 Fig. Maximum flow speeds at the peak of the flood (results of modeling)

Оther publications
All publications
How do intrathermocline lenses interact with a large-scale surface cyclone?
WPI RAS substantiated the possibilities of reducing the risk of catastrophic floods on the Eastern Sayan rivers